This article appeared today on the Forbes website:
Will The Community Be Able To #SavePetSociety From EA?

Forbes contributor Ewan Spence writes about the cross-section of technology, media & human nature. In the vast pond of 1.1 billion Facebook users, our small group of 32,000 passionate Pet Society players who refuse to move on to other games is being noticed.

Does family-friendly Disney really want to be associated with a company that's being tagged as a pet-killer?

How does pulling the plug on games that are still viable, with over one million players per month, affect players? Will those players, not to mention all their friends and relations, ever want to spend money on games they don't own again? Spence has an excellent take on these issues, and how companies should make the eventual shutdown of games a part of their overall plans. 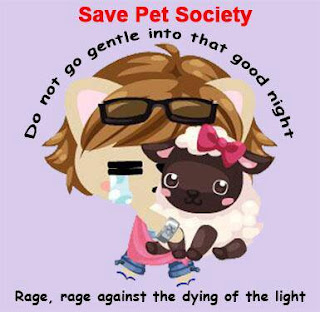 The other bit of good news, is that someone from the Please Save Pet Society group was able to speak with someone from EA corporate headquarters. They are aware of our stalwart band of pet parents who refuse to go away quietly.

We have 32,000 people from around the world who are actively engaged in an online game that transcends languages and borders and time zones. Pet Society knows no age limits. Some of us are deep into AARP territory. Other are well under the official FB age limit of 13. (Playing under parental supervision, mind you.)

Somewhere deep inside the most cynical and grizzled of each of us there is a bright, playful,  curious inner child. In the pixels of Pet Society we breathe that air once again. We remember.

If everyone played Pet Society, we'd have world peace, my husband often says. Seeing the posts in Spanish, Italian, Portuguese, French, and Greek, not to mention whatever they are saying in Kanji or Korean or Chinese -- I have to agree.

Posted by Danine Cozzens at 11:25 PM No comments:

One of the nicest parts of playing Pet Society is having a circle of friends who are active players, and having your pet visit them every day. This does generate "points" within the game, but it's become a lovely experience in itself, and one that I shall miss profoundly when Electronic Arts shuts the game down forever in a few weeks.  Today's photo sequence shows my pet Tizzy greeting pets of active players. Half of them are real-time friends and half are friends I know only though Facebook, but would be happy to meet some day. 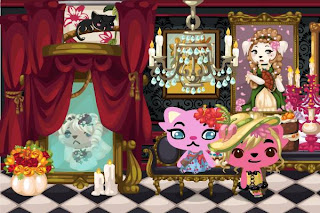 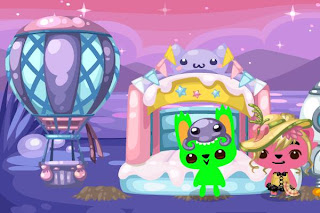 Not sure what is happening on Bocopai's planet, but it's colorful. 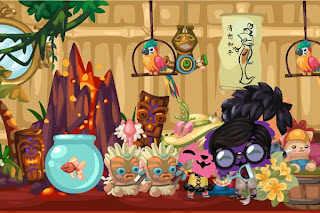 I love you, Mr. E, but don't spill your wine glass! 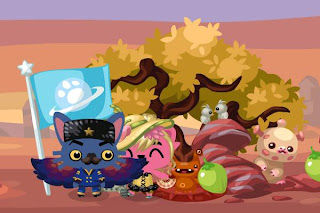 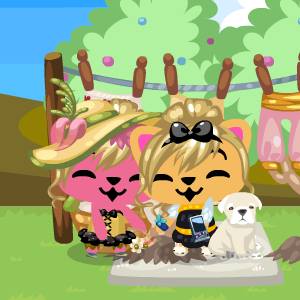 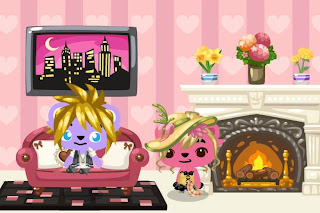 Greeting to Madison, whose human we still hope to meet in person. 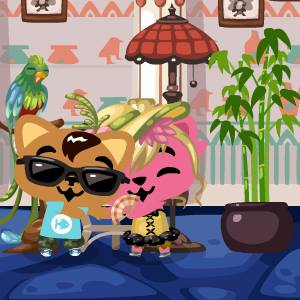 We did get to meet Yogi's human in person after years of internet correspondence.


Miss Bubbles is surrounded by hungry petlings, not unlike her human. 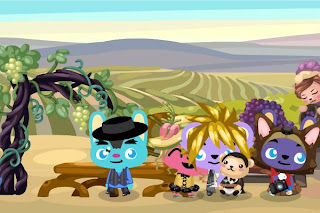 Scoop has a party going at his winery.
The beautiful backdrops were created by Pet Society artists,
and could be purchased within the game with coins you earned as you played.
This one looks like the Sonoma Valley wine region. 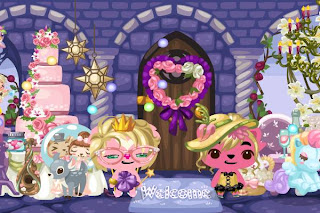 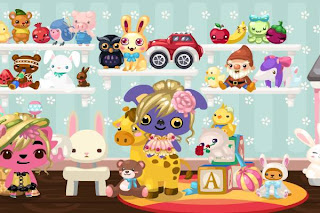 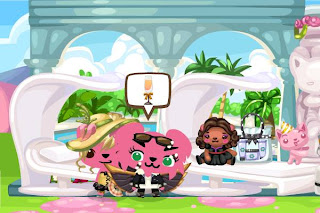 Nana needs a drink after all her work to Please Save Pet Society. 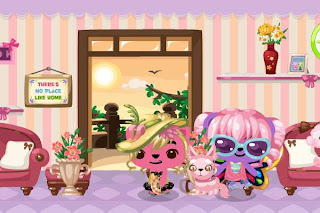 My real-life friend's pet Lilac has wise words on her crawl:
"I am very sad to know Pet Society is coming to an end.
Lilac will always love you and live on in spirit."

Love is what it's all about.
No one can stop us from loving our Pets, and the humans behind them.


Posted by Danine Cozzens at 1:54 PM No comments:

I just took a trip down memory lane as I searched out and compiled a list (lower right) of some of the appearances our pets Scoop and Tizzy made in another blog we enjoyed, Pet Society Anonymous. The writer has moved on to other endeavors, but her blog remains as a chronicle of week-to-week changes and the sheer inventive play the game inspired.

Here are some teaser photos that showcase the variety of imagination Pet Society inspires. 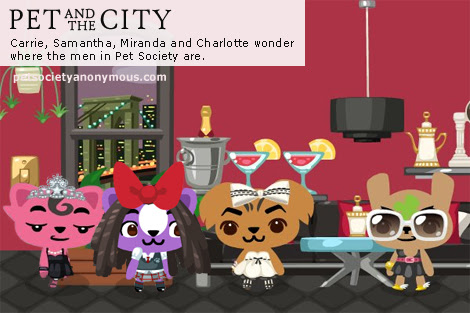 Tizzy, left, was thrilled to be included in this photomontage tribute to Sex and the City. Cocktails had just been introduced, carefully labelled as "juice." Parties had not yet been introduced, so having an image with four pets in the same room was quite thrilling. 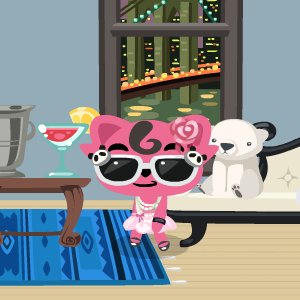 Tizzy was besotted with the New York fashion theme and redecorated her own room in a similar manner. Shortly after this photo was taken, I placed the cosmo glass on the floor while rearranging the furnishings. James was watching as Tizzy helped herself to the cocktail, which she downed glass and all as we were helpless with laughter. It was a large drink for a small pet!

Scoop gained renown for his gardening skills. There was an art to growing and harvesting the vegetables, and Scoop worked diligently to assemble cabbages of various sizes. 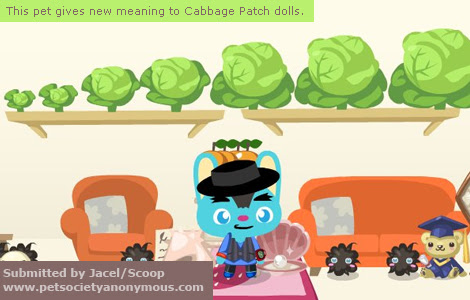 But Sccop's true noteriety came when he decided in 2009 to create Burning Pet, his own fantasy of what Burning Man must be like, constructed out of various objects available within the Pet Society game. 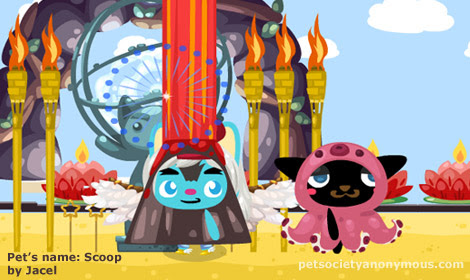 Everyone was welcome at Burning Pet, even Hideeni. The Pet Society artists/animators supplied various costume changes, such as the sporadically erupting volcano mask that Scoop is wearing, which fit well with the theme. There were also potions that induced interesting effects. Our friends who are Burners were quite amused at what Scoop was able to accomplish. We'll leave it to James to tell that story later.

For those of us who don't draw, it's great fun to see a children's storybook unrolling before your eyes. You just added a little imagination -- like being a kid again.

Posted by Danine Cozzens at 11:00 PM No comments:

There's a story here, about a unique, beautiful, nonviolent game that can be enjoyed by players no matter what their language.

When the history of online social gaming is written, I hope someone recognizes that Playfish was able to put lightning in a bottle. With simple, nonverbal choices, people of any age from countries around the globe could enjoy an online experience that could have been elevator pitched as "Second Life for Three-Year Olds." Pet Society was a beautiful, relaxing experience that you could share with friends no matter how far away in space or time. No matter what your age, part of you could touch that sweet, direct enjoyment of life that we see in toddlers, and dimly recall within ourselves. 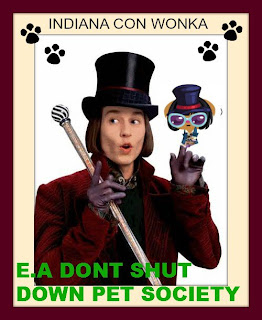 What no one may have banked on is the degree of passion that people came to feel for Pet Society. In the three weeks since Electronic Arts announced that Pet Society would end on June 14, players from around the globe have banded together on Facebook. The largest group, Please Save Pet Society, has nearly 30,000 players from around the world, posting in many languages, with one common message: "EA, don't kill my pet."

What is this lightning in a bottle?  In Pet Society the onscreen arrangement of pixels that constitutes your pet becomes part of your life, like a beloved household pet that greets you every day. Emotionally, shutting down this game is like having animal control come and euthanize your healthy pet in real life.  Through some kind of magic, the pets take on a personality and identity. You can make choices about color and features and gender. The pet seems to have a mind of its own.

Tiny choices in setting up the game ecology created something larger, a love that transcends language.  "Pet Society" in other countries is the equivalent of "Humane Society" in the U.S. The love of pets and desire to help them runs deep in humanity. 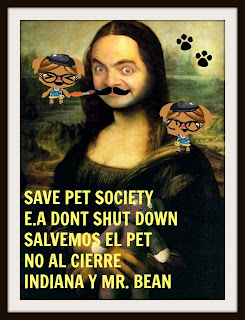 Do game companies have any idea who their true market is? Who are their "whales"? (That's apparently the industry term for people like my husband and I, who spend money on games we like, as a vote of confidence.) To announce the closure after a recent promotion offering a discount rate on the "Pet Cash" you use in the game, with no alternative for transferring that money to any other game, left many people feeling burned. This has happened with other games, driving down the number of "whales" who will continue to support the industry.

Do game companies realize that their players are not all teenagers? And that they have memories? How is it profitable to anger and alienate millions of players? Many are vowing to Boycott EA, or simply to never spend money on online gaming again. 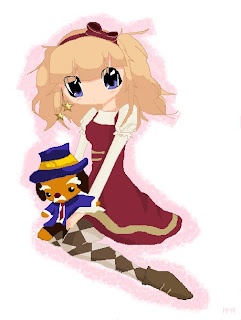 How can a company that was worth $300 million be thrown away in less than three years? The brilliant game designers and artists who created this tiny wonderland of Pet Society were given pink slips, when they deserve creative accolades. Work groups around the globe have been laid off. What kind of crazy world is it, where it makes economic sense to chew talent up, then spit them out?

Sadly, last week Electronic Arts refused the request of Pet Society users to keep the game in a grandfathered state. We don't need the quests, the weekly themes, and the constant parade of new swag. We simply want to continue to spend time in this charming and creative place, where you never know quite what is going to happen as you visit your friends. It's been a quiet place to unwind, and to marvel at what your friends' pets have been up to. It's not about the levels, or the "new high score" you achieve. 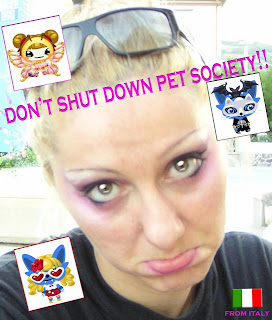 I hope some other company is able to buy Pet Society. They would rightfully earn the gratitude of over a million active players, and the respect of those players' friends. On pages that monitor stats of active users (appdata.com), Pet Society ranks 121st in all apps on Facebook, including non-games like Pinterest and Yahoo.  Surely there is some value in a loyal following.

The illustrations in this post were done by Pet Society players around the world, and shared on Facebook. Hope to give proper credits later. Please comment if this is your art, and how you would like to be credited.

Posted by Danine Cozzens at 11:48 PM No comments:

The International Appeal of Pet Society

Just found, via LinkedIn, of all places, a Spanish language gaming blog with a post that appears to be about Saving Pet Society. (My Spanish, sad to say, is what one learns growing up in California, where navigating maps and menus is a basic tool for social survival.)

Some great art work transcends language, as the original Playfish game did. This must have been done for one of the theme weeks. 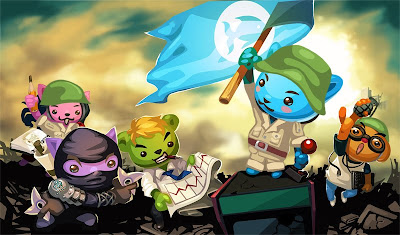 Pet Society players are exhorting their friends to play as long as the game is there, in hope some company will think an established game with a million players a month is worth acquiring. 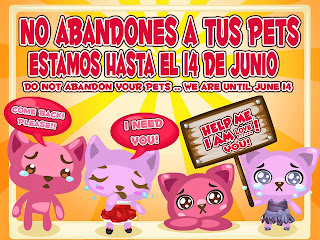 And of course the moral: 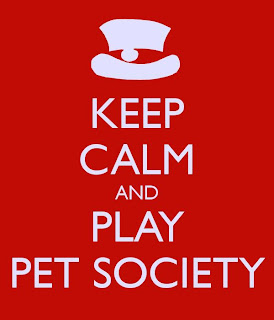 Spanish readers, please visit this blog and share your thoughts!


Posted by Danine Cozzens at 2:36 PM No comments: