Well, it's been an exciting week in Lake Wobegon, as Garrison Keillor's monologues always began.

Our computers began to crack last week under the strain of the impending closure of Pet Society that was scheduled for June 14. We were rushing to record videos of visits with our pets and their friends. We take a lot of photos within the game, but those don't capture the charming animations you see onscreen.

Tuesday night James' MacBook Pro developed the Blue Screen of Death. (I did not know Macs could do this, but Intel Inside may have its downside.) So we were off to the Apple store, moving his video efforts to my little MacBook Pro Retina. It would be several days before his logic board could be replaced.

It was time to call in reinforcements, so we made arrangements to meet up Wednesday evening with my son the software engineer to discuss our various problems. Food was brought in, problems were solved, and we still had time to admire his current video gaming setup.

My son was showing off what could be done in a game he has enjoyed playing for quite a while, the Star Wars: The Old Republic, a game now owned by Electronic Arts under license from Disney. Yes, this is one of the games that Pet Society players have vowed to boycott when Pet Society vanishes -- but hold your fire, and hear what I have to say.

Star Wars: The Old Republic may hold the key to a business model that would enable EA or some other company to make enough money off our little game to keep shareholders happy, let players who want to play for free, offer worthwhile perks to monthly subscribers, and provide a legal trading post for items you don't want.

(I loved Star Wars, by the way. I took the software engineer to see the original film when he was a mere moppet. I worked at LucasArts back when Industrial Light and Magic was suspending plastic models in front of blue screens. I did data entry on theater measurements that went into the design of the THX sound systems. I even dressed as Princess Leia from "Hardware Wars" complete with sticky buns on my ears at WorldCon 1984. But I digress.) 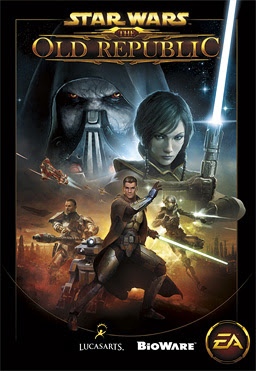 So there on my son's wide-screen tv, with personal computer power undreamed of in 1984, was the world of George Lucas' brilliant imagination, the back story. And as my son walked us through the features of the game, I realized: this is Pet Society in 3-D.

The basic elements of both games are the same. You have a character. You can customize your character as much as you wish. You can buy costumes and change their colors. Your character can go places and do things within the game. You earn points for playing the game and buy more cool stuff with it. Within the game you find a world of almost infinite variety. Surprise may lurk around any corner.
Bonus, the interface is not limited to your friends on Facebook. Once you are in the Old Republic game, you start seeing other characters who are all online at the same time. You can contact them within the game if you wish.

You can play the game for free, or you can buy a monthly subscription that gives you certain perks, like more money to spend within the game, and better things to buy with it. Both groups, the people who won't pay for games, and the people who don't mind paying if they get value for their money, are accommodated. (This game is not an X-box game but a massively multiplayer online role-playing game (MMORPG) -- do read the Wikipedia article if this is all Greek to you. It has some good info about the economics and logistics of the business of games.)

The scales fell from my eyes, so to speak. Once you get past the 2-D vs. 3-D issue, the common elements of the games are clear.

So Star Wars may not be our enemy -- but a friend in disguise! Click your heels together three times, EA: the solution may be there in your game portfolio. Knights of the Old Republic is a model of how Pet Society could continue, with some players gladly paying for bonus swag, and others playing for free. (We've wrangled about this on the Pet Society groups, free vs. subscription, and here you have the problem nicely solved. Offer both!)

Some company out there should be able to make money off this situation, with 32,000 avid players around the world who refuse to abandon their pets. As of last Friday, Pet Society was still ranked at over 1 million players per month, and over 100,000 players per day. We are still hoping for a resolution that will be a win for everyone, including the EA shareholders.

Just to be clear, I am happy with our childlike 2-D pets. I'm not sure I'd feel so engaged with a 3-D pet game. There is some psychological evidence that filling in the blanks (reading comics, or novels) engages our brains differently than watching a film, let alone a 3-D epic. Our impulse to complete the incomplete, to decipher the code, may lie underneath the way Pet Society players engage with the game. But that's a another post, for another day.

Two days past the scheduled closure, Pet Society is still online. We accept each day as a miracle. Now it's time to visit my pet, while I still can.