One of the best things about Pet Society is seeing what people do with the same stock of props and set pieces.  In the last few years, Pet Society would announce a theme for each week.  Theme-related merchandise would appear in the shops and  players would mix and match the elements with older items and see how they might repurpose items in a creative way.

When "Mars and Venus" week was announced, Bocopai was thrilled.  Until he found out it wasn't actually about the planets Mars and Venus, but the notion that "Men are from Mars, Women are from Venus."  That's not right, he told me.  He wanted to do a theme week that had Martians and the Red Planet and was fun. 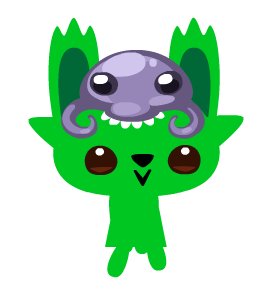 Fortunately, Pet Society provides a canvas upon which we could draw our desires.  A little collaboration with some other players and Bocopai's Martian Week Theme took on a little life of its own in our corner of the pet's society.  Bocopai designed the ice planet and the "Martian" look himself.  That week, several of us played along.

That's a great compilation across several pets' collections of rooms. As each theme comes along, you aren't locked into displaying set pieces. You can let your imagination range across connections between the new items and past items. For example, I never realized that so many teapots had been created in Pet Society over time until your Chloe proudly (and beautifully) displayed her collection of dozens of them in her room.

James, why don't you post something about the Burning Pet tradition?

The Burning Pet celebrations will come. As well as The Jackalope Who Saved Christmas.

I'm working on it! There's a whole sequence from 2009 with the oxen, the first Burning Pet, Tizzy's fashion show (shoutout to Frannie who did the real one at Burning Man), Tizzy's 12-Step program for potion withdrawal after too much indulgence at Burning Pet, which she forgot in two days and set up the Petsby Picnic as we prepared for Gatsby. We have a lot of fun mirroring our lives as seen by our pets.