Amid the beauty of Spring, April brings many sad reminders for me. My mother's death, on her wedding anniversary -- not that she knew what day it was anymore. That was the same day her mother had been found murdered in her home decades earlier. Then there's the birthday of a dear friend who did not make it to her 60th.

Does my life suck? Other people are dealing with far worse issues. (Just read your morning paper.) But we all have to cope, and grieve, and work through our sorrows and bereavements. Pet Society has been one way I connect with my friends and salute the living and departed. The Garden of Memory above is a tribute to my mom (1917-2011), who loved oriental art and cute things. 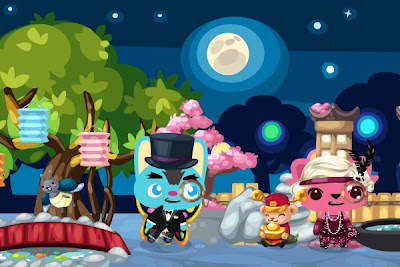 This photo was a shout-out two years ago to our friend Deborah, who had organized a group outing to see "The Drowsy Chaperone" with two dozen friends in vintage attire. The production has a song about a monkey on a pedestal, so that was our little joke. (Scoop and Tizzy made a habit of dressing up as if they were going out with us to various costumed events.) Deborah did not play Pet Society, despite our urging. We joined FarmVille and Fairyland on her behalf. The gentle online games were a great comfort to her during many months she was laid up with chemo. 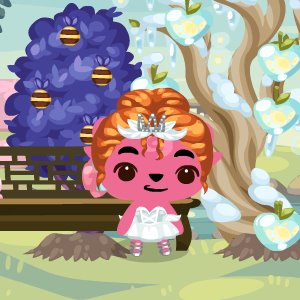 Sometimes I went with Deborah to the ballet, which Tizzy enjoyed vicariously. 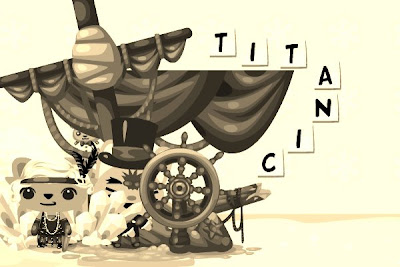 A solemn reminder (well, as solemn as the Pets get) that disasters do happen. And that gentle games like Pet Society are a great solace to people who are coping with death and chemo and other harsh realities.

When I signed the petition on change.org, it seemed for every nine persons who were angry, there was one person saying, this game meant so much to me when I was sick. It's certainly true for me. I got through a lot of funerals with dry eyes, but I teared up visiting Tizzy, knowing the game would come to an end.

Happier posts to come, with accounts of Burning Pet, the Petsby Picnic, and other antics Scoop and Tizzy enjoyed with their friends. I needed to be serious for a moment, because losing Tizzy and Scoop is like losing yet another real-world friend.

There is something special in this game that makes it a comfort in difficult times. I usually feel better after some minutes of Fake Pet Therapy. I've not seen anything else like this.

I agree. Maybe it works on the same principle as watching nature or petting (real) animals. It's something with some structure, but open ended. It has movement, but movement is not the goal. It engages us creatively, but doesn't make too many demands. As I said earlier, it really gave me something to focus on when I was a new mother and feeling very cut off from the world. The game provided solace and emotional support in a surprisingly tangible way.

Also, I love the Titanic picture beyond reason!

Wow. I had no idea. Such sadness in a time that should be all about joy. What has happened to April?