The Education of Scoop Rabbit

When I first entered into Pet Society, I had to design my pet. The various characteristic of my pet came together rather quickly into what was obviously a rabbit. When it was time to give the new pet a name, I looked at his big ears and open eyes and thought, this is someone who wants to see and hear everything! He wants to go everywhere and find out "what's the scoop". And so, I named him Scoop. 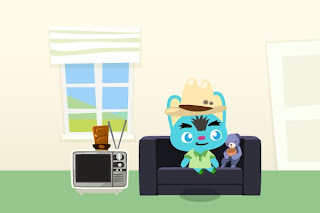 His initial appearance and name have stayed constant for four years. That's just who Scoop is. (Later I realized how much Scoop resembled Crusader Rabbit, a TV cartoon character I adored half a century ago.) 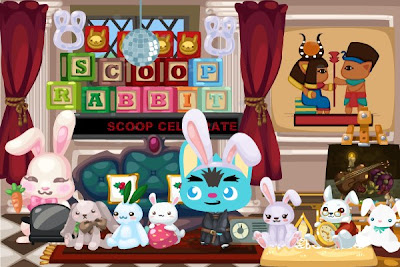 In the first few weeks of playing, I didn't spend many coins on Scoop's furniture, outfits, and fancy food. Each "new day in Pet Society", Scoop would receive additional coins and be told "You are one lucky pet!" He'd invest most of his coins buying the least expensive food, usually apples. Scoop spent his time visiting the pets of friends and of all the pets visiting the Cafe. Scoop and I would feed and wash and brush (remember the brush?) other pets who were in need. And we'd observe all the ways that the pets were dressed and their rooms designed.

We especially looked for elements in the game that the pets interacted with or that moved. I would leave notes in other pet houses to appreciate some nice bit of decoration, ask a question about an unfamiliar item, or to suggest placing certain items on the floor so the pets could play with them - a potential not always pointed out when a player purchased the items.

All this activity earned Scoop a lot of experience points, which qualified him for more rooms in his house. He didn't spend much time there, so the rooms were still rather bare - just something to sit on and a plushie or two to carry. But Scoop and I wanted his house to eventually be a wonderful place for other pets to visit.

When Scoop found an item that he could play with at another pet's home, we'd stock his home with those delightful things. Among the distinctive items were the radio that a pet could turn on and dance to, and a pinwheel that the pet blew on to set spinning. There was also a toaster that the pet could make toast pop out of, the only kitchen item at the time that the pets could use themselves. 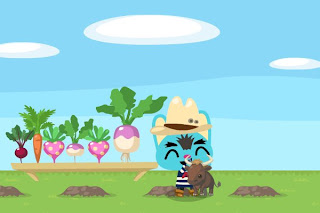 One of Scoop's first big investments was when ox plushies were being offered at a low price before being removed from the store. We splurged and got a dozen of these plushies that were put together in his yard. He improvised a cowboy look, since there had not been a cowboy theme introduced to the game yet. I helped him with using letter stickers to spell out HOME ON THE RANGE. Visiting pets could assist Scoop in herding the cattle around, carrying one at a time. 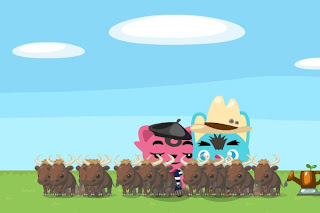 After a while, I moved the ox plushies into Scoop's entry room. The stickers now spelled out RANGE IN THE HOME. This scene changed over the course of days, indicating Scoop's attempts to move the oxen back outdoors. At one point, steaks were placed on the top of a stove to frighten the oxen. 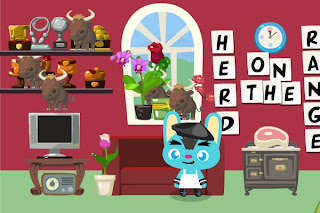 This ox herding sequence led Scoop to frequently get a lot of some one item and then see what would develop. It also led me to think more about the potential of having a storyline unfold from day to day within the landing room in Pet Society, using the letter stickers to add a little context to the then rigorously non-verbal settings of Pet Society. This collaboration between Scoop and me led to the first of several Burning Pet Festivals. But that's another story.
Posted by James Langdell at 4:32 PM

Your cattle herd was before my time. When they reappeared later (during the cowboy week, I think?) I had wondered where they'd come from, and curious about the story behind them. Cool!

Today, April 29, is Scoop's fourth anniversary in Pet Society. I don't think of it as his fourth birthday, because he seemed very fully formed and independent on the first day I played the game.