Uprising: The Pets Fight Back!

It's been only two weeks since Electronic Arts announced that they would shut down their Flash-based games, including Pet Society, a game played by millions around the globe.

EA may not understand that Pet Society more than a game whose players can be moved on to the next shoot-em-up. Playfish -- the company that originated Pet Society, which EA bought for $300M in 2011-- put lightening in a bottle. They created a magical, creative environment where the pixilated pets seemed to take on a life of their own. The nonverbal environment transcended borders, and drew players from every country with internet access.

By corporate standards nowadays, it apparently makes sense to spend $300M one year and shut down the operations completely two years later. To Pet Society players, shutting down this game is like losing a beloved family pet because the animal control officer exterminated them. A business decision is affecting not only the lives of thousands of employees around the globe who are getting pink slips but millions of players who are vowing to never spend money on a game again, or boycott any EA products. (Note: if you are a hiring influence, snap up any artists or game designers who worked for Playfish, particularly on Pet Society because they do brilliant work.)

Pet Society players are banding together. Within hours there was a petition on change.org urging EA to save the game (over 16,000 signatures so far, somewhat hampered by being a US-based, English-speaking site). Several groups formed on Facebook; SavePetSociety has over 27,000 with people posting in many languages. Others are putting up blogs, like this one. People who don't tweet are learning to use Twitter.

Some wonderful videos capture the interactive magic of Pet Society; will be posting links separately.

Today EA may be realizing it has some unhappy customers. But this is not the answer. 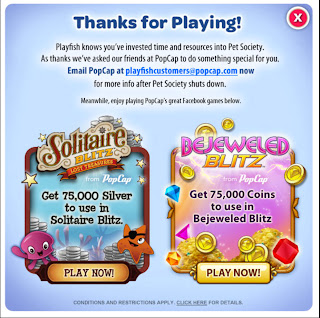 Message: We love this game. It transcends language. We appreciate the peaceful haven it provides, a space you can share with your children, a consolation in times of stress and illness, an outreach to friends across the miles who have their own troubles. We marvel at the creativity of the game designers who supply such wonderful items to use within the game. We laugh at the photos we can take as our pets interact with each other and their environment. We remember in our hearts what it was to be a child.

For every nine people who are mad as hell and walking away from spending money on games at all, or boycotting EA, there is one who wants to see Pet Society preserved in some fashion. Some of us are willing to pay for a subscription-based service, if that is what it takes. We don't need new swag or quests; we just want to see our pets and visit their friends around the world. There's enough material in the game as it is to play with for years to come.

I fervently hope some arrangement can be reached before EA scraps the code and scrubs the servers on June 14. This game does not deserve to die.

Maybe EA has lumped all Pet Society players into the group labeled "casual gamers" and thinks that one "casual game" is as good as another. They are wrong. The people who loved and embraced Pet Society, who logged in and really got a lot out of the game aren't necessarily going to be interested in a puzzle game, or a skill game (or even another Pet Society-like game with less charming content) even if they are also "casual" games. I enjoy a good puzzle game every once in a while, but they never hold me for more than a few weeks at a time.

Pet Society has always had a spot in my day, even if it's just to check in and make sure my petlings were fed. It wasn't a disposable game. It was a game that got more fun the longer I played it. It's a game with no wrong answers, only differently interesting choices. It was a game where players had fun showing off their creativity to each other, rather than racing around competing for high scores. It's the FB game equivalent of "Whose Line Is It Anyway?" where the points don't matter. The only winning point was engaging with other people. You can't do that in a puzzle game.